You couldn’t have asked for a more picturesque location when we did a recent delivery of our first SuperVan 900 into South Africa.

Having completed the installation at one of our installation facilities at Wonderboom Airport in Pretoria, we shortly thereafter proceeded to deliver the aircraft to one of the owners out at their property on the Madikwe Game Reserve in the North West Province.

Known as being one of South Africa’s premier safari and wildlife tourism destinations, it is situated along the Botswana border, about 20 km from Gaborone. It is host to an incredible diversity of species including 66 different mammal species including the Big Five and approximately 300 resident and migrant bird species. Evidence of their existence was immediately noticed upon landing at the remote air strip. Surrounded by beautiful vegetation and fantastic topography, we found the area scattered with hundreds of footprints from animals of all shapes and sizes, of whose habitation we are now within.

Soon employees from the lodge arrived and everyone began to surround their recently upgraded Caravan to learn of the changes had taken place. Next, we prepared for a small inaugural ceremony as they pulled out a small wooden table from the Ranger Rover, which was then quickly adorned with a white table cloth and crystal champagne glasses filled with “bubbly”. With everyone gathered around the aircraft we listened as Carl and Bobby proceeded with the inauguration ceremony consisting of several speeches to those involved with the installation and a final ceremonial toast of the first SuperVan 900 onto African’ soil. Cheers! 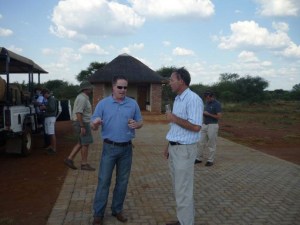 As we wrapped things up for the day, we realized that all good things must come to an end. The table cloth was eventually folded back up and the champagne glasses emptied. We all loaded back up on the aircraft, so that it could be placed into position for service beginning the next day. With a final “buzz” past the airfield, we set our coarse back towards Pretoria, and placed another SuperVan 900 delivery into the books.

Texas Turbine Conversions, Inc. has been modifying aircraft with Garrett TPE331(Honeywell) engines since the mid 90’s. The company holds STC’s for multiple aircraft to include the DeHavilland DHC-3 Otter and the Cessan 208/208B Caravan utilizing the Honeywell engine. We have sold over 40 Otters since 2001 and over 35 Cessna Caravans with the Honeywell TPE331-12JR engines.